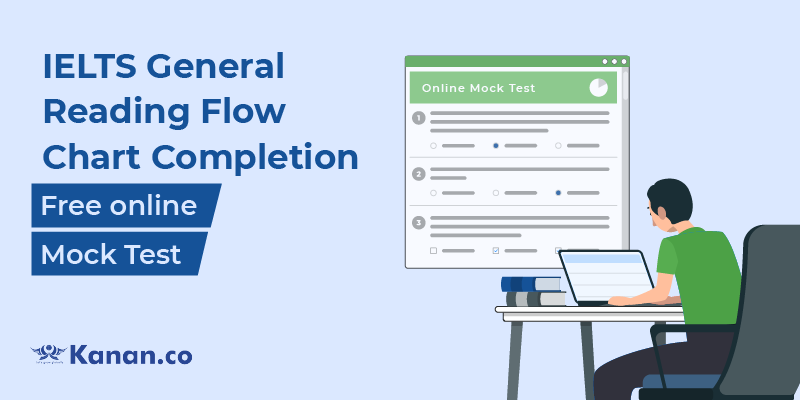 Flow chart completion questions appear with a general passage followed by the flow chart structure containing a process or sequence with blanks taken from the passage. You need to
read the passage to understand the flow and fill in the gaps with the correct answer. Since this is a challenging task, we’ve included three IELTS general reading flow chart completion mock test questions in this post to train you. 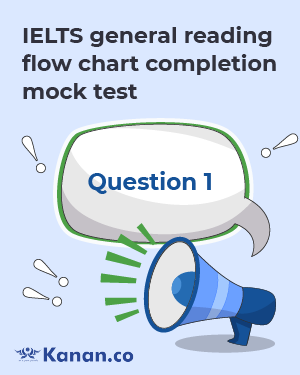 Answer questions 1 - 7 which are based on the reading passage below.

Even without the capability to analyze human species that have not achieved similar qualities, it is impossible to specify the evolutionary processes that have made present humans so unique from other creatures. Svante Paabo and his colleagues at the Max Planck Institute for Evolutionary Anthropology in Leipzig, however, have developed a scientific masterpiece that enables such a comparison. They made public an evaluation of Neanderthal man's DNA in 2009 at a meeting of the American Association for the Advancement of Science.

Homo neanderthalensis, to give it its proper name, existed between 400,000 and 30,000 years ago across Europe and parts of Asia. It shared its range with interlopers in the type of Homo sapiens, who were moving out from Africa, towards the finish of this period. The two species, however, were unable to maintain a fixed coexistence. The emergence of Homo sapiens in a location was typically followed by the elimination of Neanderthals, for causes that are yet unknown.

Dr. Paabo and his coworkers have only undertaken a cursory comparison of Neanderthal and modern human DNA prior to 2009. Since then, they've made a more extensive investigation, offering interesting light on the two species' interwoven past. That history is more connected than many individuals previously believed.

Dr. Paabo and his colleagues analyzed the genomes of five existing individuals from Africa and Eurasia to their Neanderthal genome. Prior genetic studies had found that there was no interbreeding between Neanderthals and people today since it only studied DNA passed down from mother to baby in cellular structures called mitochondria.  This result is inaccurate, as per a current, more thorough investigation that looks at DNA in the cell nucleus rather than the mitochondria. Dr. Paabo found that Eurasians are between one and four percent Neanderthal by examining the DNA in the cell nucleus of Africans and different Eurasians.

Complete the flow chart below

Choose NO MORE THAN THREE WORDS for each answer 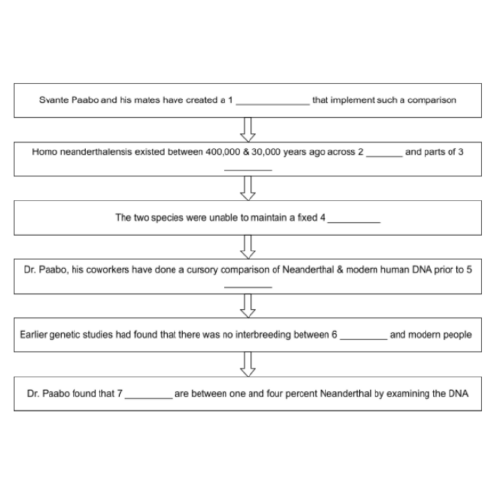 Answer questions 1 - 5 which are based on the reading passage below.

To a certain extent, agriculture demands that each country have a set of different meals that are indigenous to that country. Even with the strength of agricultural science, advancements in distributing food, and changes in food economics to transform the ethnocentric qualities of food, it is still feasible for a nation to "be famed for" a particular meal, even if it is commonly available somewhere.

Two topics in the sociology of food studies show that food is connected to social culture. The degree to which cuisine is embedded in national culture as well as the degree to which cuisine is integrated with national culture. The first creates food as a reflection of the allocation of power within social institutions, whereas the second defines food as a reflection of social connections. However, illustrating the value of food in individual relationships and social systems is not enough to justify keeping food at the centre of national culture. To achieve so, a degree of embeddedness must be demonstrated. At this time, it would be reasonable to examine the nature of culture.

The difference made by Pierce between a behavioural contingency and a cultural contingency is important to our knowledge of culture. While a part of behaviour may take place very frequently, involve a network of individuals, and be reproducible by different networks who do not know each other, the meaning of the behaviour does not go above the action itself. A cultural tradition, yet, includes and defines ‘’meta-contingencies” that is, behavioural traditions that have a social purpose greater than the action itself and which, by their nature, reinforce the culture which houses them.

Celebrating birthdays is a cultural routine not because everybody does it but because it has a spiritual meaning. Contrast this with the method in Britain of celebrating “Guy Fawkes Night”. It is basically a reason for a good time but if fireworks were restricted, the event would slowly die away completely or finish up as a cult in California. A smaller-scale instance might be more helpful.

Complete the flow chart below

Choose NO MORE THAN THREE WORDS for each answer 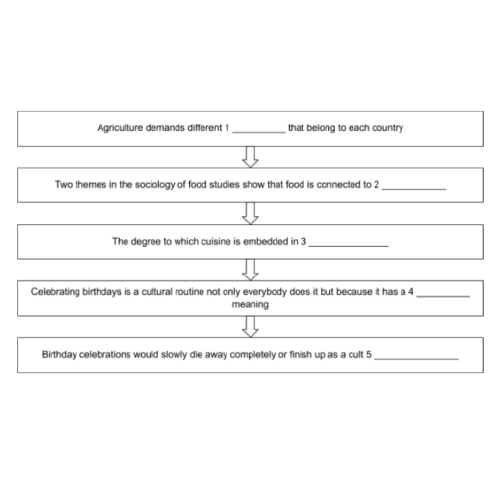 Answers for the mock test

Get a chance of knowing the question paper structure and test format by taking the IELTS general reading flow chart completion mock test. Experts believe that only enough practice brings you the best score in your final IELTS general test.