In IELTS academic writing task 1, you are required to describe visual information such as graph, table, chart, diagram into your own words. Pie chart task 1 is one of the important and challenging tasks in the IELTS writing test. You must write at least 150 words within 20 minutes. Identify the key features in the question and describe it with related vocabulary and appropriate tense.

Our IELTS experts created 12 pie chart task 1 sample answers based on the challenges you could face while attempting IELTS writing task 1. You have to organize the report with useful language and appropriate sentence structures. It is important to practice the writing tasks and analyze the sample answers in order to attain an 8+ band score on the writing test. 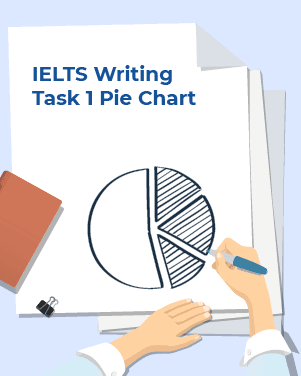 You will know how to respond to the following pie chart task 1 questions by reading this entire blog.

The pie charts below show electricity generation by source in New Zealand and Germany in 1980 and 2010.

Summarise the information by selecting and reporting the main features, and make comparisons where relevant. 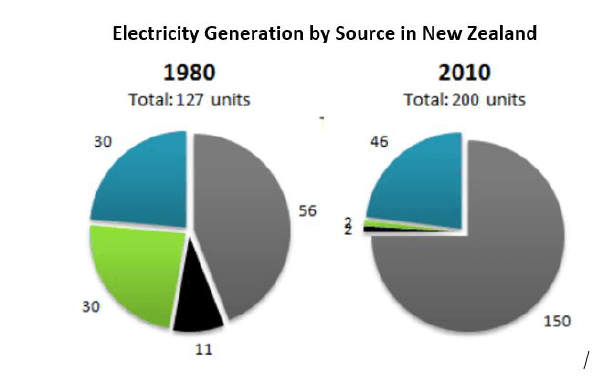 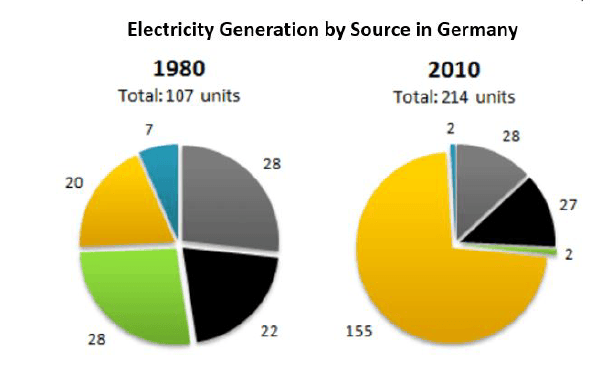 Essay for Electricity Generation by Source in New Zealand

The two pie charts emphasise the sources of electricity in New Zealand and Germany in the years of 1980 and 2010.

New Zealand utilised coal as a major electricity source in 1980, which is 56 units. In 2010, it was dramatically increased to 150 units in the total of 200 units. The rest of the units are generated by petroleum, natural gas and hydro.

Nuclear contributed only 20 units in 1980 for Germany. But, it became 155 units by the year of 2010. And, the coal remained the same for both years with 28 units. Other sources include petroleum, natural gas and hydro.

Know more about the IELTS writing task 1 Vocabulary to easily formulate your essay.

The pie chart shows the proportion of different categories of families living in poverty in the UK in 2002.

Summarise the information by selecting and reporting the main features, and make comparisons where relevant. 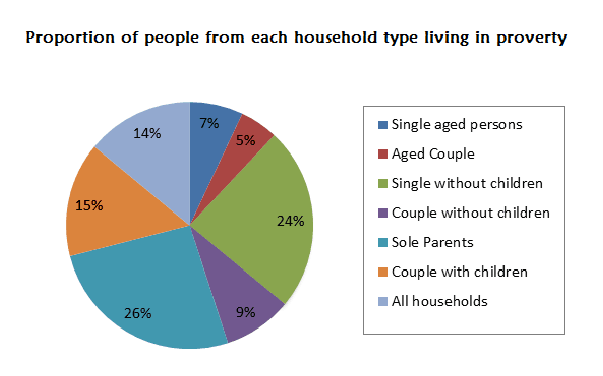 The pie chart displays the statistical information on different categories of people living in poverty in the UK during 2002.

Based on the overall data, sole parents and singles without children were mostly affected by poverty while the aged couple and single aged persons were least affected.

It is evident, as per the chart, that aged people were least affected by poverty, followed by single aged persons who were slightly higher in percentage. Former merely covered up about 5% and latter was around 7%. And, it should be noted that a total of 14% of all households lived in poverty.

The pie chart below shows the main reasons why agricultural land becomes less productive. The table shows how these causes affected three regions of the world during the 1990s. 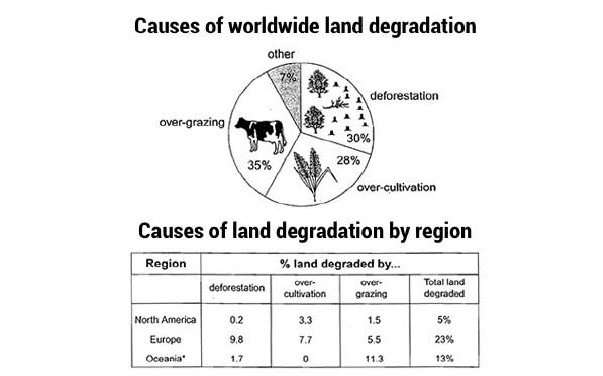 The pie chart illustrates the causes of worldwide agricultural land degradation while the table displays the three regions of the world which are affected by the degradation of land.

As per the chart, the three major causes of land degradation were over-grazing, over-cultivation and deforestation. And, Europe is the country where the lands were degraded, largely due to deforestation.

Overgrazing is the main reason for global land degradation which comprises 35%. And, the two other major causes were deforestation which accounted for 30% and over-cultivation was about 28%.

In Europe, the percentage of degraded land was around 23%, and it should be noted that the major cause was deforestation. Over-cultivation was the second significant reason for the degradation of land, which accounted for 7.7 percent. In contrast, North America had 5 percent of land degradation with the result of 3.3 percent of over-cultivation. And, in Oceania, over-grazing had substantially degraded the agricultural land with the percentage of 11.3 in the total of 13%.

You should spend about 20 minutes on this task.

Summarize the information by selecting and reporting the main features and make comparisons where relevant. 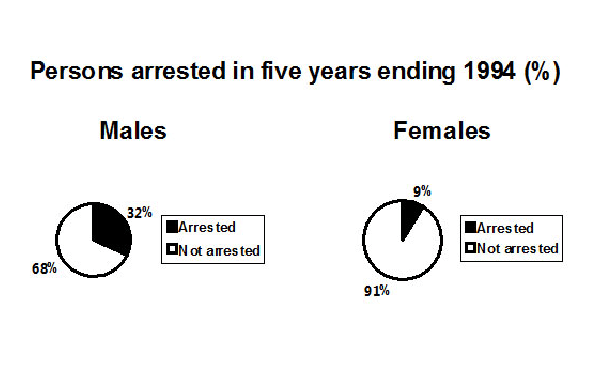 The pie chart displays the percentage of people arrested from 1989 to 1994. And, the bar chart illustrated the males and females who were arrested in the recent years.

According to the pie charts, the males were largely arrested compared to females. And, with the bar chart, it is known that public drinking was the dominant reason for the recent arrests. Compared to males, females were arrested most.

As per the bar chart, the top two reasons that males got arrested were Drink driving and public driving, at 27% and 31% respectively. And, a large number of females were arrested for public drinking, about 38%. And, assault was the second major reason. And, rest of them such as breach of order, theft and other reasons were slightly higher in males than females.

Read about the IELTS writing task 1 types and get a clear understanding about the various question types. 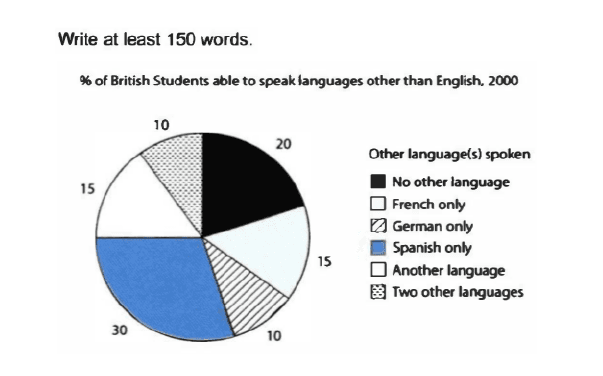 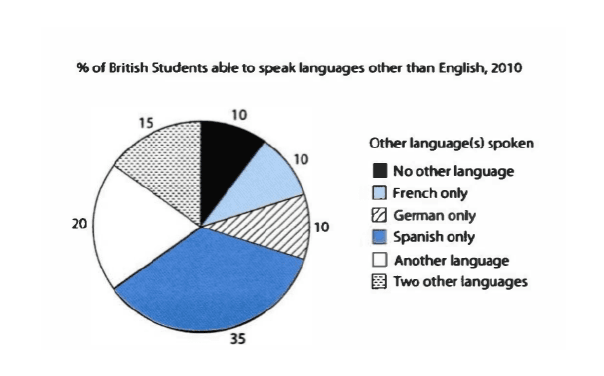 The given pie chart depicts the information about the languages that British students from an England University were able to speak other than English, in the years 2000 and 2010.

In both years, British students mostly used Spanish as their spoken language and German was the least spoken language. Still, those years had several differences regarding the other languages. 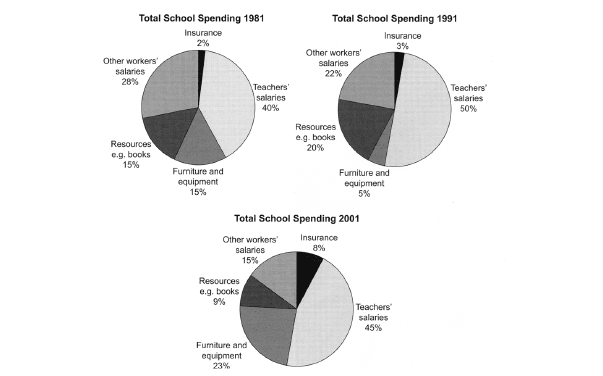 Essay for Changes in annual spending by a particular UK school

The three pie charts illustrate the amount of money that UK school spent annually for the years 1981, 1991, and 2001.

As per the pie chart, the salaries of the teachers had the highest percentage for both the years while the insurance accounted for the smallest percentage of money spent by the UK school in all of the three selected years.

It is essential to know the writing method for pie chart essays. You can write an effective pie chart essay by developing the step by step strategy. We have listed out the steps that are required to write a pie chart task 1 essay.

To learn about the strategy more, read how to write pie chart.